“We sing about God because we believe in him.  We are not trying to offend anybody, but the evidence we have seen of Him in our small little lives trumps your opinion about whether or not He exists.”

We have been enjoying a lot of Christmas music around here, and a lot of great music in general.  It is unbelievable how much musical talent there is in the world.  There are people of all races, ethnicity, religions, and backgrounds who have so much talent to offer.  God does not seem to discriminate when it comes to handing out musical gifts, and we all have the opportunity to enjoy it.

(I have been a little disappointed with the exclusively secular “holiday music” played on the radio this year.  Anyone else notice that?)

Today’s miracle was found in an article I read about a composer.  Rather than go through the effort of rewriting the story, here is the link.  The story can be found in the first four paragraphs.

Sunday I stayed home to take care of a sick husband.  Generally he should have been able to take care of himself, but I felt it would be a good thing to stay with him this time.  Part of me felt like a kid skipping school, it wasn’t really that great of a reason to not go to church.

He finally fell asleep, and I got ready to go pick up the older kids who were at church by themselves.  I was surprised to hear a knock at the door.  The neighbor around the corner, who I have not talked to for quite a while, was standing there looking for anyone who could help her out.  She had some unexpected car problems, and desperately needed a ride and no one else in the area was home.  It was not a big deal for me because I was on my way out the door to go right by where she needed to go.  It turned out that she was leaving to help out with a musical presentation, and had gotten herself in way over her head.  She was surprised and thrilled to find out that I could also help her with her project.  She had a great idea, but really didn’t now how to pull it off and it was tanking fast.  We’ll get together and figure it out later this week.  I’m probably one of the few people in the area who could help her with that particular problem as well.  It appeared to both of us that things were just supposed to work out that way.

Every March I hold a contest for my piano students.  It is the time of year they start getting too busy or lazy to stay on top of their practice, so I just need to give them a little push.  My children are no exception to the lazy bug, and it helps them as much as anyone.

Yesterday I was explaining to my son how the practice contest was going to work, the prizes, and what he was supposed to work on.  It was too much, he didn’t want to practice, he couldn’t do it, he wanted to give up before he even started.  That evening I set out the song he was working on and his practice chart and just left it on the piano.  Looking for a way to get out of going to bed, he gravitated over to his music.  Suddenly he remembered how much he actually liked the song he was learning, and sat down to practice, doing everything he had been asked to, and more.  This morning, first thing, he has already gotten to work and finished learning the song that he had been putting off for months!

We all know that time changes things, incentives change, and so does perspective.  If I had forgotten that concept, and gotten caught up in the negative emotions of the moment, I would have decided that working with this child was not possible and that it would take a miracle to get him to even try.  Patience, time, and change can allow things to happen that we would have previously considered impossible.  I believe this is one way miracles happen.  It is not because the impossible has occurred, but because time and patience have occurred.

It’s been such a busy week, and it is only Wednesday!

Anyhow, yesterday I had to take one of my children out of school due to a long term illness, and begin homeschooling.  I am amazed at how smoothly the transition is going.  In reality I like homeschooling anyway, but that was not the choice we had made for this year, so it was sort of difficult.  If he had gotten ill like this before this day of technology he would have grown up to be basically uneducated, or at least undereducated.  Now, we file paperwork, pay his library fines, then we signed him up for my favorite online curriculum, pick a few novels we want to read together, and we’re good.  He’s struggling getting back into a routine after spending so much time just laying in bed unable to do anything, but now he can work at his own pace.  Two days ago the school was harassing us about incomplete coursework and excessive absences, today we learned about electrical currents, java applets, and started reading about the Holocaust.  Amazing the information we have access to so easily.  Technology miracle anyone?

It is inspiring me to keep focused on the online music courses I am still working on.  I think I just found my test subject!  Shameless plugs:  I love www.time4learning.com through Odessy Learning,  and I hope to finish the coursework for www.learnmusicathome.com – that now is at least online, and somewhat mobile compatible.  A lot of work still to do.

After 20 years of marriage, I had never heard my mother-in-law sing or play the piano.  I was always told about how talented she was, but she would never perform when people were around.  She blamed it on social phobias.  Last night she both performed numerous pieces for us, and sang a solo!  Never thought I’d see that.  Guess sometimes we just have to wait for the time to be right.

This month in our piano lessons we are working on composing.  Composing is so much easier, and so much more fun than it used to be.  Now we have computers that help us troubleshoot problems, and adjust mistakes at the click of a button.  Just like many other things in life that have been made easier through technology, I’m grateful for composing software, and the ease and convenience of digital technology.  Even electronic pianos have their place, and they exist in a world as a compliment to acoustic pianos.  Pretty cool to have so many options.

For anyone who feels like tinkering around on their own piece of music, I recommend the open source (aka FREE) program musescore.  It can be downloaded HERE.  No need to worry about viruses, or codes expiring, or trials.  Just download and start learning to use it.

Just for fun, here is a variation on Twinkle, Twinkle adapted for Halloween.  (Yes, I used musescore, and although I have purchased other programs, this one works just as well.)

Maybe They Will All Disappear

The Phantom of the Opera (1986 musical) (Photo credit: Wikipedia)

Last night I was able to attend an incredible performance of Phantom of the Opera with my husband and 3 oldest children.  We love the music and enjoyed the excitement of the performance.   It is some of my favorite music and very well done.  The price tag was reasonable also.  How lucky I am to be able to enjoy one of the exclusive cultural events of the century.  Miraculous to watch in my living room.  Miraculous talent.

It is a must see.  http://www.pbs.org/wnet/gperf/episodes/the-phantom-of-the-opera-at-the-royal-albert-hall/about-the-program/1258/

This piano is amazing on 2 levels.  First – I don’t have before photos because everyone who saw it universally agreed it belonged in the dump.  Second – My husband has put a lot of work into this restoration.  Work that he could not have physically done a year ago.  We are grateful for his health and for his expertise.  It sounds as good as it looks – or better. 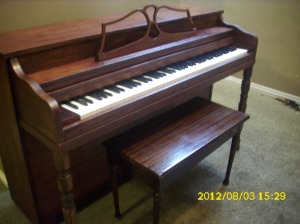 We believe all things, we hope all things, we have endured many things, and hope to be able to endure all things. If there is anything virtuous, lovely, or of good report or praiseworthy, we seek after these things.
SEEing Miracles
Blog at WordPress.com.
%d bloggers like this: